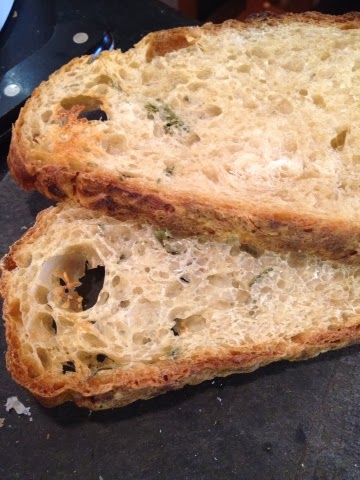 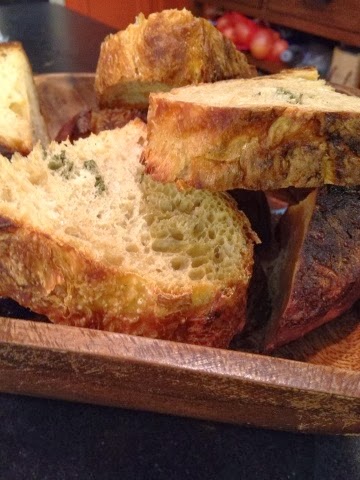 Years ago at the very beginning of my baking career, and I think even before the dawn of the viral anything, a friend introduced me to an article written by Mark Bittman, which magnificently and quietly, or so it initially seemed, introduced all of us home bakers to the No-Knead bread recipe formulated by New York baker Jim Lahey of Sullivan Street Bakery.

I still remember grabbing the hand-scribbled recipe that my friend, Michael, handed me one groggy morning as we picked up our tweens from a sleepover.  He told me I would love it and that baking the perfect loaf would never be the same.  I’d like to thank him, because he was right.  But even more so than that, he launched my true search for perfection in creating over and over again the “perfect” loaf in every batch of bread that I have made since that morning, from baguettes to sourdough to deep fried sweet yeast rolls.  Yes, you read that correctly. 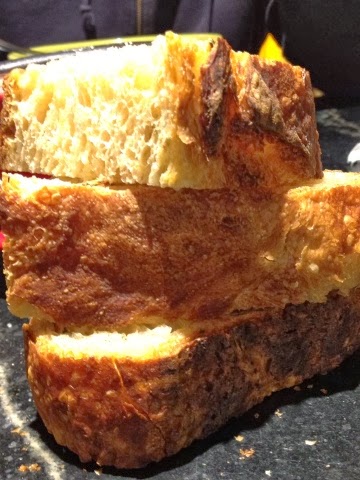 Since having another kid, and another, and still another since that crisp autumn morning, my bread-making has certainly taken a back seat.  Instead of owning and operating a bustling ice cream shop, cheese kitchen and bakery, I manage a household and write this blog, which still helps me dip my toes into the culinary sea, but at a much more leisurely pace.  However, as my young kids grow older, I’m beginning to find time for myself again.  (That sounds so melodramatic–not intended…)  With this time, I’ve started teaching classes again on all subjects that are tossed around on this site, bread making being one of them.

So, in the spirit of this blog, focusing on quick, easy, healthy and inexpensive ways to make amazing bread, it surprised me very little that my thoughts turned to the No-Knead Bread recipe, and how I could teach this to my students.  Well, as it turns out, a lot has happened since that initial article in 2006.  No shock here, but Cook’s Illustrated did their own version, which as most Test Kitchen recipes do, promised to work out all of the kinks for the home cook, so you could get it right the first time with out getting discouraged on the road to perfection.  (As I do recall, Jim Lahey’s method did have a few that an inexperienced baker might get snagged up on.)  With this in mind, Colin and I decided last night to do both, side-by-side, a bread tete-a-tete, to see which loaf would come out on top.

I’m in the kitchen right now while each loaf is on its final rise.  Keeping with the humour of the day (“if you don’t laugh, you cry”), my cell phone (and camera) decided to run out of batteries just as I was about to take my first shots of my fermented dough.  So, we are with out those, but the comparison that follows should help all of us in determining which path would be best suited to our specific needs regarding time, experience, tools, ingredients, etc.

I will not be as detailed as Cook’s only because this is not my full time job and I currently have a toddler in time out that I must attend to, however, I will do my best to list the pros and cons of each method in the hopes of finding the one that is perfect for all of us.

Ingredients were simple
Baked bread had a great crumb

CONS
Dough smells like nothing
The dough rose about 2/3 less than Cook’s (not sure if this is a con)
Smaller air pocket
Dough was soupier
Method was more difficult for transferring
Baked bread crust got soft once cooled, however when toasted would re-crispCook’s Illustrated Almost No-Knead Loaf

PROS
Fermented dough smells great, huge depth of flavor
Big air pockets
Dough was easy to work with
Flavors are easier to manage due to the freedom to substitute different beers, vinegars, etc.
Baked bread had a great crumb and crust, very crispy
Transferring the dough to the dutch oven was much easier and foolproof with the parchment

CONS
Ingredients were more difficult to gather, measure
Knowledge of kneading makes this not as easy as Jim Lahey’s loaf

What I’ll do here is include the recipe that I’ve decided is the best after making many loaves and tweaking the ingredients ever-so-slightly.  After baking both loaves, I decided (and so did everyone else) that the Cook’s loaf was the best tasting and had the best texture.  If you do not want alcohol in your bread, however, just substitute water, but keep in the vinegar.

I’ve always been a big fan of using apples in a sourdough starter.  The finished bread always has extreme depth of flavor (think French bakery in Normandy) but it does not actually taste like apples.  It pairs well with cheese, salads, soups, and can be used for sandwiches, french toast, bread pudding or simply just alone with a smear of butter.  Yum!  The best news is about this recipe is that it has the characteristics of the best french loaf and sourdough loaf all in one with none of the wait time, feeding of the culture, guessing game.  This is hands-down the best loaf of bread I’ve ever made, and it requires little to no previous knowledge of bread making.  In other words, if you’ve always wanted to make good artisan bread for less than $1/loaf, try this immediately.

Combine the following ingredients in a bowl using a rubber spatula:

Mix until cohesive and liquid is absorbed by flour.  Transfer to an airtight container, and place on your counter to let ferment 18-24 hours. 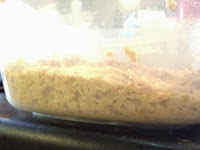 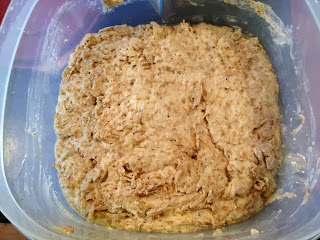 After fermentation time is up, turn your dough out onto a lightly floured surface and pat into a rough circle.  Using the fingertips of your left hand and the heel of your right hand, pull the top edge of the dough into the center and press lightly into the center.  Repeat 10-15 times, turning the dough in a counterclockwise direction as you go.  Flour hands as needed.  Try to use as little flour as possible on the dough itself.

Turn the dough over and place on a long piece of parchment (18″ or so) and place in a bowl.  Cover loosely with oiled plastic wrap (or you can spray directly onto the top of the dough).  Let rise 2 hours. 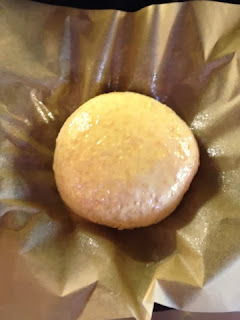 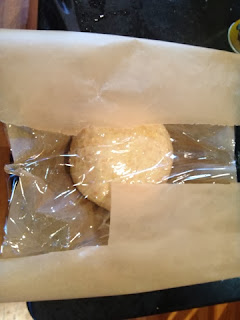 Preheat your oven to 500 degrees and place a cast iron dutch oven with lid into the oven to heat up.  Once you’re ready to bake your loaf, using a serrated knife, slice open the top of the bread about 6 inches long and 1/2 inch deep.  Carefully remove dutch oven, open lid, place dough inside with parchment hanging over edges.  Replace lid and put in the oven for 30 minutes.  Once 30 minutes is up, remove the lid and reduce oven temp to 425.  Continue to bake for an additional 20-30 minutes.  Bread is done when it sounds hollow when tapped and is a deep brown.  Remove from oven, take off of parchment and cool on a wire rack for two hours.

Bread will keep for up to 5 days in an airtight container.  Toast slices or put back in a 350 oven for 15 minutes to reinvigorate. 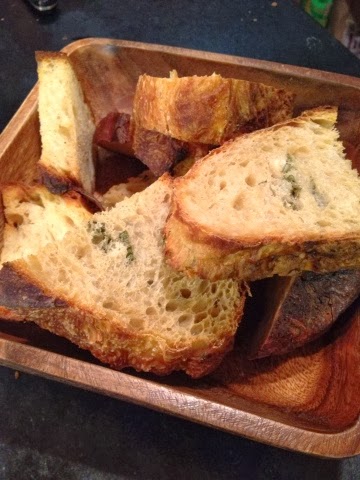 A: For those who found that their bread did not rise as well as mine, remember that the during the first fermentation (18-24 hour rise) the dough does not grow a lot.  Once you shape your dough into a ball and let it rise again for 2-3 hours, you will see a slightly more noticeable rise, but not substantial.  The big rise takes place in the oven once you’ve sliced your dough on the top and placed it in the dutch oven to bake.  Another problem could be your yeast.  Even if it is “fresh from the store,” it could still have been mishandled during shipping and/or storage at the store.  To know for sure if your yeast is going to work well for you, test some by adding it to your liquids and salt before mixing in the flour.  After 10 minutes, your yeast should begin to foam and smell very “yeasty.”  This is a test to prove that the yeast is still alive and active.  If you don’t see any action, and instead end up with yeast that looks the same as it did when it went in, you need to find more yeast.  Leaving the yeast in the liquid mixture will not harm your bread-so no need to start over, just add another packet from a different purchase, if you’ve got one at home.

Q: why did my bread rise too much?

A: For those of you who had dough that looked over-risen, try to give it less time on its second rise (2 hours).  All of this depends on yeast strength/activity, so remember to judge how long your rise should be batch-by-batch, depending on what your dough looks like at different stages.  Once you’ve made a few loaves, you’ll begin to get really good at knowing when to do what.  Trust your instincts.

I love putting on many different hats, and in fact, I thrive quite nicely from rotating through a lot of jobs in one single day. My days are jam-packed and filled with as many activities and memories as I can possibly stuff into their mere 24 hours.